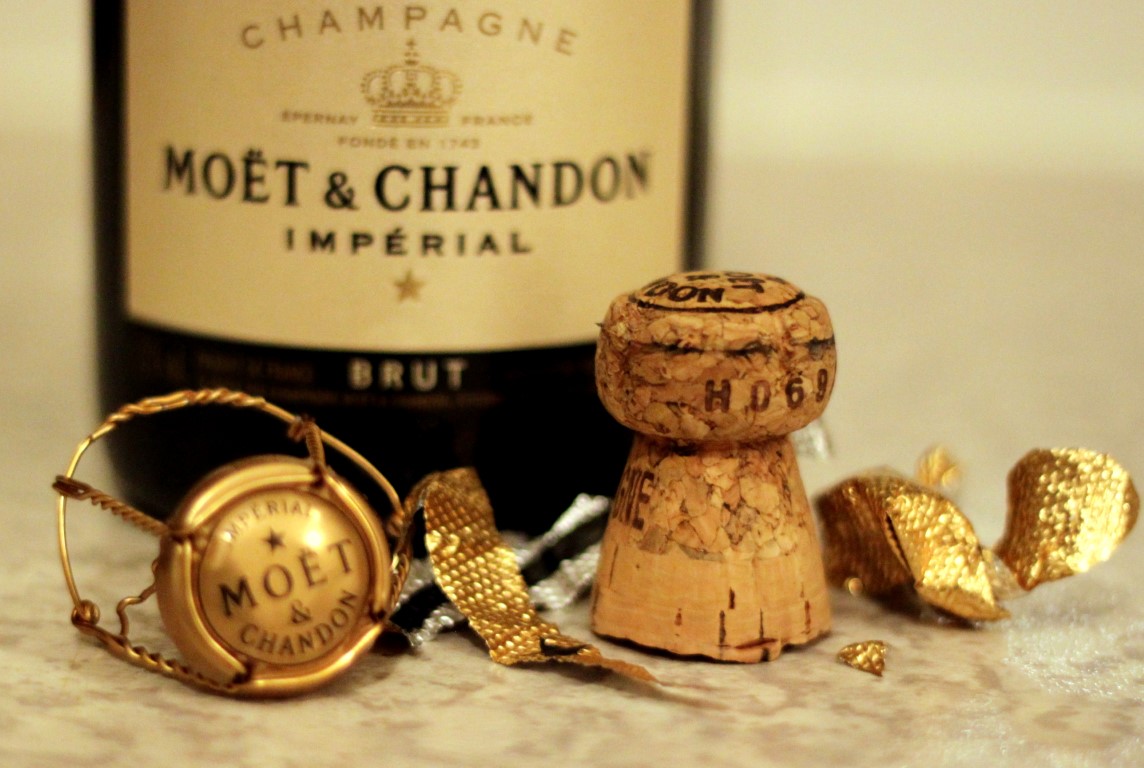 I was thinking about how often we refer to good dialogue as ‘sparkling’. For some reason, thirst perhaps, the word sparkling immediately made me think about my favorite beverage — champagne.

Then, probably to keep my mind off drinking in the afternoon, I began to think about how much in common champagne has with good dialogue, and with good writing in general.

Here’s what I came up with.

Champagne takes a long time to create. There’s the aging of the vines, the grape growing, the harvest, the process by which a vat of grape juice becomes this magical beverage. But that’s all backstory. Sure, we needed it to get to this point, but let’s face it, our experience begins the moment we ease the cork out of the bottle. Nobody thinks about the green grapes that were picked ten years ago any more than your reader cares on page one that your heroine’s mother used to braid her hair when she was five.

Champagne opens with a bang. And so does a good book, a good scene, a great sentence. That popping sound of the cork catches the attention, gets the sensory glands working in anticipation of the treat they are about to receive - then the dramatic pause as the liquid pours into the glass. Now, the first sip. Mmmm. The bubbles dance on your tongue.

You probably know where I’m going with this.

Great dialogue dances on the tongue too. In order to dance, your characters’ words must have effervescence, a certain airy lightness, and of course, an underlying music.

Champagne, at least the good stuff, is expensive, so you don’t want to waste it. You want each word to count, to be the perfect word for this character to say in this precise line.

When I hit a wonderful patch of dialogue, I often stop and re-read it aloud. I’ll listen over and over to a brilliant play or a loved movie just to feel the words dancing on the tongue and hear the music of their rhythm.

Not all your dialogue needs to be Dom Perignon, of course. Lots of other beverages sparkle, too.

Beer is my man’s drink of choice and I often think of it as a manly drink. Your hero’s dialogue may be have more in common with hops than grapes. His speech may be tangier, perhaps a little bitter, and definitely not as clear as the heroine’s. But beer still bubbles and sparkles, whether he’s a frothy lager kind of guy or a Guiness man.

Well, having dragged that metaphor out until it begged for mercy, let’s look at a practical example.

We’ve all read novels or unpublished manuscripts (perhaps even our own) where the dialogue is heavy and cumbersome. The couple bicker, bicker, bicker until you, the reader, want to slap some sense into them. Here’s an example I just made up. I’m deliberately using no dialogue tags or stage direction. It’s just talk.

“Ginny, I told you not to go snooping in the cellar.”

“I’ll go wherever I please.”

Well? Did those lines sparkle like champagne on your tongue or lay there like sour milk—irritating and unpleasant?

Is there a way to make dialogue sparkle? Partly it’s taking the time to go over and over it, knowing your characters and their word choices, taking out the unnecessary words, reading the passage aloud until the lines feel right.

You can apply the same tests to sections of dialogue that you can apply to any scene. If I’m not happy with a section I’ll ask myself:

1. Does this exchange move the story forward? 2. Does it reveal important information, maybe some of that backstory I didn’t dump into the beginning? 3. Does it reveal character? The best dialogue does all three, but you should be able to answer yes to two of those questions in order to be satisfied your dialogue is doing its job. Looking at Ginny and Hubert above, that dialogue shows a little of their characters. Enough to turn you off both of them as being irritating, pig-headed and probably not too bright, but not much else.

What could we do to increase the value of that exchange?

“Ginny, I told you not to go snooping in the cellar.”

“I didn’t mean to. I never saw anything. It was all dark.”

“You stay out of there.”

“It smelled funny. Like the butcher’s stall on a sunny day.”

“You just forget all about it.”

Well, this won’t win any Pulitzer, either, but in the same six lines, it does move the story forward - we’re wonderingwhat’s down there and what Hubert’s going to do next. It reveals important information. We know Ginny’s already been down there, and discovered it smells like a dead carcass. It reveals a little more character, too. Ginny’s obviously nervous, Hubert is blustery and maybe protective of Ginny or maybe threatening, it’s hard to tell in so few lines but at least we’re getting a sense of personality and plot. And hopefully enough questions to turn the darn page.

One of the great joys of writing fiction is creating dialogue that sparkles, dancing on the tongue like champagne. And speaking of champagne, I’m suddenly feeling thirsty… I wonder if there’s any in the house.

You are welcome to reprint this article or quote from it, but please attribute it to Nancy Warren and include the following: