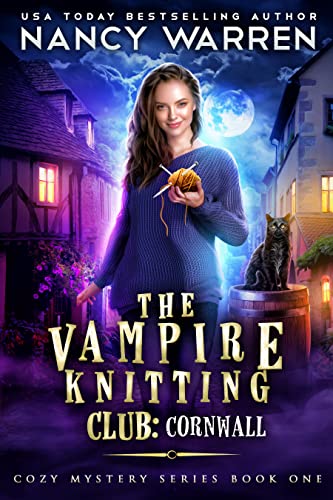 A knitting shop in Cornwall—what could be more peaceful?

Turns out, just about anything!
When Boston-bred witch Jennifer Cunningham agrees to run a knitting and yarn shop in a seaside fishing village on the Cornwall coast in England, she worries she’ll be bored. Okay, she knows there are vampires living in a former tin mine, but she’s accustomed to vampires. They knit so fast that they make excellent customers and some of them are becoming good friends.

Jennifer is fascinated by the magic and myths in Cornwall, and she’s falling in love with her new home. However, when she’s exploring the rocky beach one morning, she discovers the victim of a fatal accident. The dead man appears to have fallen, but did he really die by accident? Or was he murdered?

The more she discovers, the more Jennifer is convinced there’s a killer on the loose. And, with all the colorful characters she’s meeting, both living and undead, she’s pretty sure one of them is the murderer.

But which one? The all-too-attractive undead pirate? The vagrant artist? The fellow shop owner who’s a little too helpful?