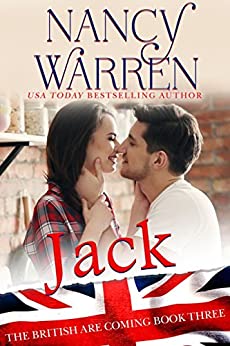 The British Are Coming: Jack

No commitment? No problem!

Rachel Larraby has had a lousy year. Her divorce became final and the five star restaurant where she was head chef closed. She'd still be on the couch watching Friends reruns if it wasn't for her older sister Maxine dragging her to England. However, once she gets to Hart House, it's natural for her to take over the catering for the big events that help support the estate. She's less than pleased when she discovers that her first big event will be a wedding. Until she meets Jack Flynt, the brother of the bride. When she's warned away from Jack, since he's famous for always being a groomsman and never a groom. Which makes him perfect for Rachel. She'd love to have a no-strings attached fling with a sexy Brit.

Jack Flynt never believed he'd find a woman like Rachel. She's perfect for him in every way, except that she'd run a few thousand miles if he told her how he really feels.

This is the third sexy romantic comedy in The British are Coming series.

Amazon
Romance, The British Are Coming
Subscribe to Nancy's NewsletterCome join me in my private Facebook Group, Nancy Warren's Knitwits!