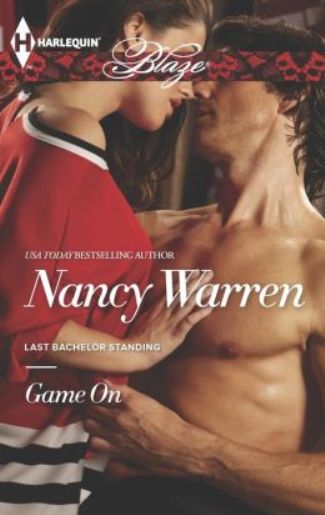 Game On is out now. It’s the first of a trilogy for Harlequin Blaze about three guys who have known each other since they played in the sandbox together as little kids. I actually know three men who go back that far and are still the closest of friends, so that was a place to start. But so what? They needed something else to bind them. And that something became hockey.

Now, I know, not every woman loves hockey (though an amazing number of us do, and this new crop of young, sexy players in the NHL obviously has nothing to do with that.) However, my guys aren’t in the NHL. They play in a charity league for emergency services personnel but, trust me on this, they are still hot and I fell in love with every one of them.

Yes, I know. When you say you fell in love with a fictitious character of your own creating you sound a bit like a woman who collects cats and doesn’t get out much… But isn’t that the joy of romantic fiction? To step out of the real world and fall into love with a sexy guy for a few hours? Or, for me as the writer, a few months which, frankly, is a lot longer than some of my romantic relationships.

I’d love to tell you more, but it’s time to start feeding the cats…

Game On is in stores and online now. Breakaway, the second book, is out in April and Final Score rounds out the series in June.