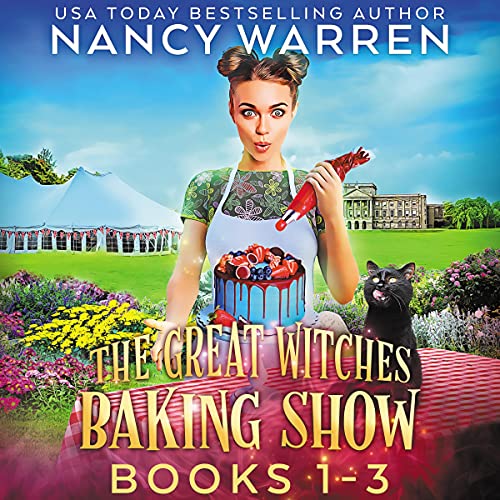 Under the Great British Baking Contest competition tent, there's more at stake than winning the title of Best Baker in All of Britain. For amateur baker Poppy Wilkinson, there are mysteries to solve, secrets and lies, even murder. As a fledgling witch, Poppy's having enough trouble controlling her sponge cake, never mind trying to control her powers. Besides solving crime, Poppy's also trying to uncover the mystery surrounding her own background. Will she discover who she really is before she gets sent home? Or worse?

The Great Witches Baking Show is a loving homage to all competitive baking shows, but especially Bake-Off. Imagine Bake-Off with witches and murders - and recipes! Set in the lovely English countryside, these are classic British mysteries with a twist. There's no gore, swearing, or sex in these paranormal cozy mysteries - just good fun, quirky characters, an interfering ghost, and an adorable familiar or three. Sink your teeth into this bingeable series today.

A baker with secrets.

The cameras are rolling.

On your marks, get set, die.

Poppy Wilkinson is thrilled to be chosen as a contestant on The Great British Baking Contest. As an American with English roots, winning the crown as Britain’s Best Baker would open doors she’s dreamed of. In more ways than one. Appearing on the reality show is her chance to get into Broomewode Hall and uncover the secrets of her past.

But strange things are happening on the show’s set: Accusations of sabotage, a black cat that shadows Poppy, suspiciously unsociable residents at Broomewode Hall - and the judges can be real witches.

There are murmurs that Broomewode is an energy vortex. It certainly makes Poppy see and do things that aren’t exactly normal, and seems to draw interesting characters to the neighborhood.

When a fellow contestant dies in mysterious circumstances, Poppy has more to worry about than burned pies and cakes that won’t rise. There’s a murderer on the loose and it’s up to Poppy and her new friends to solve the crime before it becomes a real show-stopper.

From USA Today best-selling author Nancy Warren, this delicious series of cozy paranormal mysteries will have you guessing until the end. Includes recipes.

Can she bake a winning cake without getting iced?

Competition is hotter than the pre-heated ovens as The Great British Baking Competition moves into cake week. Amateur baker Poppy Wilkinson has a lot to deal with, from learning she has talents she never knew about, to trying to keep cool and bake under pressure.

She’s also trying to track down the secrets of her parentage. Meanwhile, she’s saved from death by a local Border collie who seems to think she’s part of his flock and herds her out of danger. Was it an accident or does someone want her out of the baking competition permanently?

With witches, an energy vortex, and an ancient manor house that holds it’s secrets tight, Poppy’s barely got time to practice her fondant icing, never mind escaping from a killer.

Taste this culinary cozy mystery series from USA Today best-selling author Nancy Warren. Each book is a stand-alone mystery, though the books are linked. They offer good, clean fun and, naturally, recipes.

British amateur bakers must turn out the perfect scone in this week’s filming of The Great British Baking Contest. But fledgling witch Poppy is losing her concentration as she gets closer to discovering more of her own history at Broomewode Hall, a postcard-pretty manor house in Somerset, England. However, someone is warning her to leave as she’s in danger.

Can she keep her cool while solving mysteries, working on her witch skills, and still turn out a decent scone?

Taste this culinary cozy mystery series from USA Today best-selling author Nancy Warren. Each book is a stand-alone mystery, though the books are linked. They offer good, clean fun and, naturally, recipes!

Find your Favorite version below: